x
Sorry this event has already expired.
×
Since you are viewing your campaign page as an organization,you can not make donations.
× The peer-to-peer campaign Donate to Colin Patrick has been created successfully for Team Our Lady of the Angels 2019 .
This is a draft only viewable by you. To publish this campaign click on "Manage" link above. Mission of Our Lady of the Angels THANK YOU for visiting my marathon fundraiser page!  A little bit about me…this fall I will be entering my third year (Theology 1) at Mundelein Seminary.  In my first two years of formation at Mundelein, I have met some incredible people, to include a group of Sisters who are a part of a Chicago-based religious community called the Franciscans of the Eucharist.   It is through these sisters that I was introduced to Team Our Lady of the Angels, named after their mission parish and home located on the west side of Chicago.  The mission seeks to bring the hope of Christ into an area of great poverty.  This hope is manifested through the various outreach ministries (food pantries, clothing distribution, afterschool programs, camps, bible studies) connected to Our Lady of the Angels.  All donations to this webpage go directly to supporting the Franciscans of the Eucharist and their mission, Our Lady of the Angels. 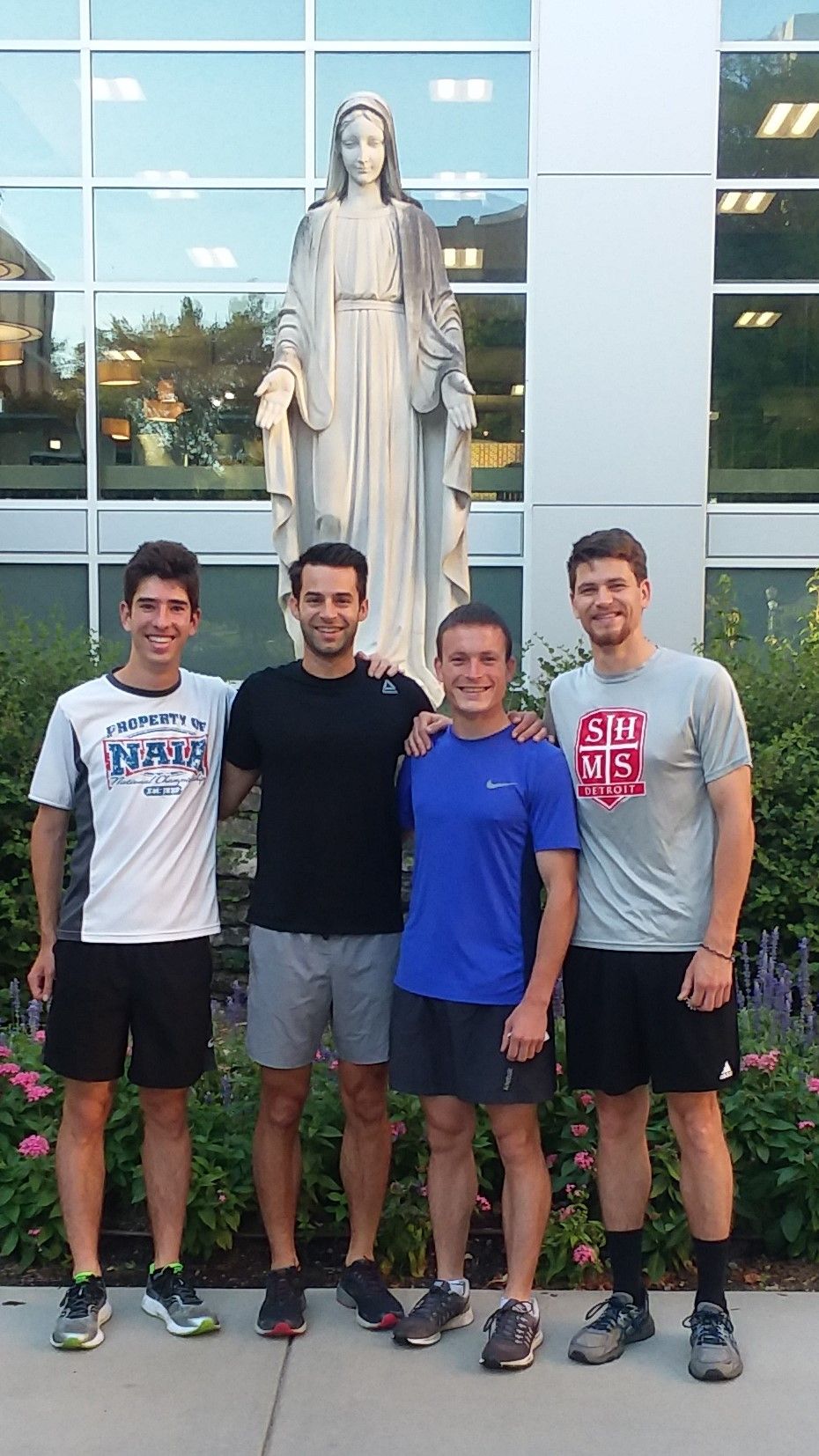 THIS SUMMER I had the opportunity to join other seminarians from across the country in a dynamic 9-week spiritual formation program at Creighton University called the Institute of Priestly Formation (IPF).  In the second week of the program, we entered an 8-day period of silence (no phone, email, tv, radio, music…no talking) in order to foster a deeper prayer life.  Words cannot describe the experience (no pun intended, lol!) – it was incredible.  For the remainder of the program, we attended courses aimed at unpacking the graces given during our 8-day retreat, and received instruction on various prayer methods found within the rich spirituality of the Church.  In one of my courses, the instructor – a former marathon runner – asked our class, “How does one know one is running?”  Seems like a stupid question, but his point was this: in order to run, you just have to start running.  In the same way, in order to begin to pray, you just have to start talking to God.  This seems simple enough, but the reality of running or praying can be difficult.  To run well requires effort – and the hardest part is often just getting started.  Similarly, to pray well requires effort.  For me, the hardest thing to do when it comes to “praying” is often something very simple – such as turning off the radio in my truck.

PRAYER is something very personal to each individual – God wants to speak to each person in the quiet of his or her own heart.  In this 'heart to heart,' we are called to be like Mary who pondered God’s plans and “reflected on them in her heart” (Luke 2).  Prayerful reflection requires that we seek solitude with God alone – this Jesus shows us by how he frequently “would withdraw to deserted places to pray” (Luke 5:16).  At the same time, prayer is also communal in nature.  Just as a running group or workout partner enhances one’s fitness level, in a similar way, prayer groups and bible studies allow for a deeper communion with Christ.  This communion with Christ reaches its summit at every single Mass, where the largest "prayer group" – those on earth with the angels and saints in heaven – gather as one family around the Lord’s banquet.

RUNNING this summer has been a breeze thanks to a great running group that was formed while attending IPF.  The idea to form a running group was inspired by God’s Providence, namely in that it just so happened that one of the other seminarians attending IPF (Brian) was also a member of this year’s Team OLA!  How cool is that?!  Brian and I agreed that we ought to train together while at Creighton, and fortunately some other brothers joined us.  Every Saturday morning, we would gather by the statue of Our Blessed Mother to begin our weekly “long-run.”  This Saturday morning “tradition” had us running from Nebraska to Iowa!!   Sounds more intense than it really was, for the Iowa border is only 2-miles from Creighton’s campus.  During our long runs, we enjoyed each other’s company, conversations, and stories.  The miles flew by – we were running without even realizing it!  This summer, I’ve been blessed to experience a similar phenomenon in prayer.  There were days when I didn’t even realize I was praying – I was simply having conversation with my friends: God the Father, God the Son, and God the Holy Spirit.

Thank you for taking the time to read about my summer experience.  I share this reflection not that I may boast, but that I may share with you my hope in Christ.  May this same hope abound within each of you, and through your contribution, overflow to our brothers and sisters in need.  Please consider making a financial or spiritual sacrifice in support of the mission of Our Lady of the Angels.

In Christ and Mary,